Is Fish Good for Cats?

Many of us make a positive association between cats and “fish for dinner,” possibly because of cartoons we’ve seen that depict cats licking their whiskers with the skeleton of a fish they have completely consumed. Also, cat foods historically used fish when it was once a plentiful and inexpensive ingredient — unlike now when fish has become a costly luxury, at least for us!  Those “old fashioned” cat foods (some of which you might still find in the supermarket) often had a very strong fishy odor, which people were led to believe was what cats wanted, or what was needed to draw them to their food bowls. In fact, cats have a highly developed sense of smell so letting them know that “breakfast is on the table” does not require bombarding their sensitive noses.

Does Magnesium in Fish Cause Urinary Crystals in Cats?

The short answer is No! You might hear people say that fish is not good for cats because of the amount of magnesium it contains — believing that it contributes to urinary crystals and eventually urinary tract stones. There are several things completely wrong with this belief (and it is a belief, not a science-based fact).  Many kinds of fish are actually low in magnesium — some cats will get crystals regardless of their diet — and anyway, there are two “opposite” kinds of crystals and urinary stones anyway.

First of all, research shows that you cannot prevent crystals from forming just because a cat is fed a diet low in magnesium. Crystal formation is at least partly a genetic tendency. You can think of it like high cholesterol levels in some people, regardless of whether they vigorously reduce the fats in their diet. They will have high cholesterol anyway, just as those cats will tend to have crystals in their urine.

But wait! What Kind of Crystals Does a Cat Have?

People concerned about feeding fish to their cat need to understand that two very different kinds of crystals can form in a cat’s urinary tract: struvite or calcium oxalate. To make it even more confusing, there are two kinds of magnesium! Magnesium chloride acidifies a cat’s urine, which is exactly what you want to achieve in a cat who is prone to crystal formation. Magnesium oxide encourages a more alkaline urine, which is the ideal environment for struvite stones to form.

Other Foods Can Have More Magnesium than Fish

While it’s true that fish — especially saltwater fish — is higher in magnesium than other kinds of proteins, it’s all relative. Magnesium content is measured per 100 grams of raw weight. Here are some examples: trout (22 mg) and catfish (23 mg) have lower magnesium levels than chicken thigh meat (24 mg) while chicken breast is exactly the same as mackerel, 28 mg. Salmon and cod are about 25 mg, which is lower than light meat turkey (27 mg) while dark meat turkey is lower at 22 mg. Where it gets “fishy” is when tuna is involved — it jumps off the chart with 50 mg of magnesium — but hang on because all tuna is not the same (as Charlie knows in the tuna commercial).

We have all been cautioned to limit the amount of tuna that we eat (as sushi, sashimi or tuna salad) or that we feed our human children as tuna fish sandwiches. Experts have recommended people to consume tuna no more than three times a week — and that is because of the mercury and other possible toxins in the red part of the tuna meat.

When we say “tuna” we think of what comes in a can or pouch for people or we think of the enormous fish that are sold at auction for $500,000 to high end sushi restaurants in Japan and elsewhere. That is not the tuna that winds up in a cat food can! It is the discarded portion of those tuna — or that of less valuable but still large body tuna — that is used for pet food. Not only does that tuna have a high concentration of mineral salts (bad for a cat’s urinary system) but tuna is also high in polyunsaturated fats which cats do not metabolize well. And then there is the mercury and other toxins.

One thing’s for certain: do NOT feed tuna canned for humans to cats! It is not in any way a nutritionally balanced diet for a cat — it has the problems with salts, mercury and fat mentioned above — but also, if packed in vegetable oil it can rob a cat’s body of essential vitamin E. 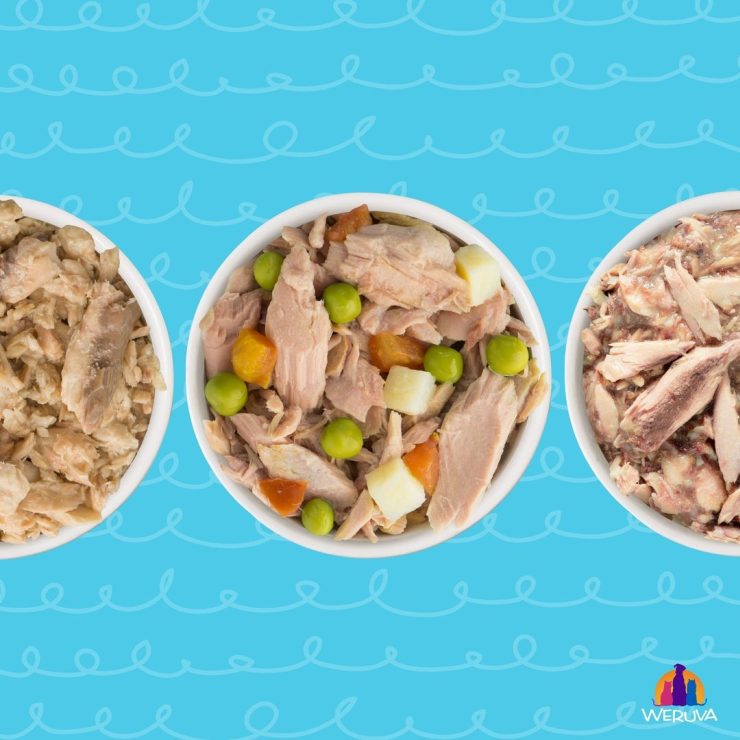 There are other species of tuna which are smaller bodied and do not pose the risks already mentioned. Skipjack tuna is another fish species, which is also easier on the environment. So you want to feed cat food made by a company that is mindful of these issues. Weruva is owned by David Forman, an ingredient savvy “food nerd” (like me) so they have always embraced skipjack as a healthy, appealing and environmentally gentler ingredient. They make a delightful Mack & Jack with Mackerel and Grilled Skipjack in Gravy as well as a Frisky Fishin’ Friends Variety pack that includes recipes with shrimp and other fishy ingredients.

Not All Cats Adore Fish

Cats are highly individual in their likes and dislikes, as anyone who lives beside them surely knows, so there will always be cats who enjoy fish as one of the proteins they are offered in their wet food and other kitties who are not big fans of fish. Individual cats may like fish more or less, but as a species they have no special affinity for it. As descendants of wild cats, they would not have had access to fish which are not plentiful in the deserts or jungles! While many cats do respond favorably to the strong smell of tuna or mackerel, others shrug their little kitty cat shoulders, though they might like milder flavored fish. They are cats, after all, and they work hard at keeping us guessing!

NOTE: My perennial advice is to rotate the proteins you feed your cat — whether every day or week. They need variety in their food sources to avoid allergies, have a balanced diet, and not get hooked on one taste or texture.