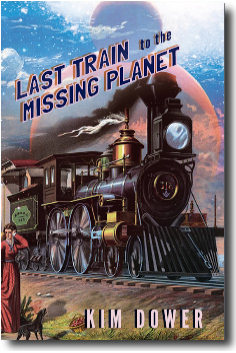 On this week’s Dog Talk I interviewed Kim Dower, a wonderful California poet who read aloud many of her dog-themed poems. I was struck by one in particular, that will be appearing for the first time in her upcoming third book of poetry, Last Train to the Missing Planet. She gave me permission to reprint it before the book even comes out so more people can enjoy it. I think it captures the essence of the wondrous moments of bringing a new dog into your family (whether a puppy or older one) and embarking on that thrilling new relationship, beginning with giving the pup a name.

They’re young and in love
so they think of human names:
Zoe, Ruby, Judy — like the name
of a girl you’d sit next to in math.
They move on to dog baby names,
Lamby, Girl, Puppy.
They like Puppy so for an hour,
that’s what she’s called.
Come here, Puppy, they sing,
her paws — pink, tender — slide
across the room. Puppy’s a sweet name,
I tell them, but soon your puppy
won’t be a puppy, and when she hurtles
through the park her teeth locked
onto a sloppy stick, a pit bull chasing her down,
how’ll it sound when you call, Puppy, Puppy,
your voices airy as frisbees floating
across the grass. I watch the puppy lick
my son’s lips, nibble his girlfriend’s nose,
devour their faces, as if they were made of sugar,
devoted fur ball all ears and eyes,
eyes that have been on this earth before.
By dinnertime her name is Gwen,
a star’s name, a nurse’s, or what you’d call
the middle child of a noisy family.
I watch Gwen pour herself
into their arms. There is no name
for the way she loves them.
No name for a sun that shines only for you.
(Have a comment? Share it on Facebook.)